We have written before about the benefit of the Beta Glucans in TrueGlo to the immune system. They work by improving macrophage function while simultaneously decreasing some of the negative acute phase proteins the immune system generates.
In this document we will review some of the other trial work we did this fall that demonstrates why active macrophages in high numbers are very important to your animals. In the next entry we are going to review some recent research that was done on the interaction between Beta Glucans and mycotoxins.
In the work we did this fall we attempted to simulate a show pig being hauled to a show where they are exposed to disease and brought home. In this case the disease we challenged them with was Actinobacillus pleuropneumoniae (App.) One group was fed our TrueGlo product and treated with Draxxin, another group was not fed TrueGlo but was treated with Draxxin . The third group was untreated  before or after challenge.  We measured both mortality and the percentage of the lung diseased at the conclusion of the trial.
We chose Draxxin as the antibiotic for two reasons. First, show pig exhibitors commonly use Draxxin. Second, it is in a class of antibiotics known as macrolides and they concentrate in the macrophage and use these cells to get access to the disease causing bacteria. What we thought going into the trial was that because Beta Glucans increase both the number and the activity of macrophages we would get a better response from these antibiotics when animals were receiving TrueGlo. We were right! 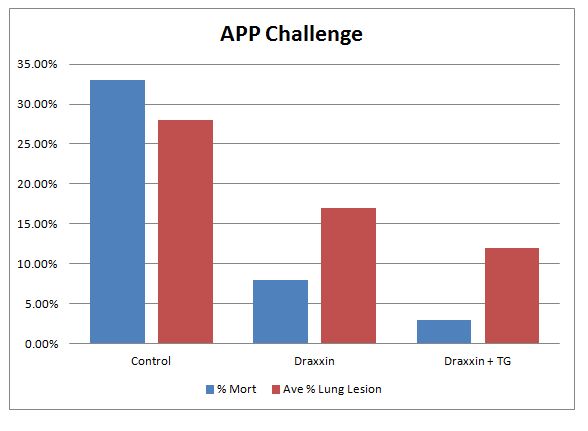 Feeding TrueGlo improved the performance of Draxxin in this trial. Pigs supplemented with TrueGlo had 3 times better chance of surviving the challenge and had about 30% less damage to their lungs than pigs that were treated with Draxxin alone.
Using antibiotics responsibly is in the livestock industry’s best interest. We need to use them judiciously and when our animals get sick we need to make sure we are getting the most we can out of the antibiotics we have available. In this regulatory environment, we are not getting any new antibiotics anytime soon so we need the ones we have to work for a long time. Feeding a supplement like TrueGlo is one way to reduce the use of antibiotics and make sure they have the very best chance of working when you do.

Visit www.goinshowin.com, drop us an email, or give us a call. We would love to help and answer any questions you have.


The secret to how TrueGlo works is in the combination of ingredients and is an example of the whole being greater than the sum of its parts. That said to build understanding we are explaining each component individually.  TrueGlo contains a number of beneficial metabolites that improve livestock health and performance naturally. These are derived from bacterial, yeast and plant sources, including live bacterial probiotics, Octacosanol, Beta Glucans, MOS, Mannose, and Glucosamine.

Last month we wrote about octacosanol and the positive effects it has on muscle metabolism and how it helps your animals drive longer and builds the “right kind” of muscle for your show stock. In the past, we have written about Beta Glucans and their effect on stimulating the immune system and improving the immune response. In our next post we will go back to Beta Glucans and talk about a few properties they have and how they bind mycotoxins and how important that is this year.  Today we are going to discuss MOS and mannose and their positive effects.

MOS stands for Mannan Oligosaccharide it is a complex carbohydrate and is composed of mannose sugars connected in long branched chains so it looks like a cactus. MOS has a host of benefits for livestock and that is why it is an important part of TrueGlo.

First, since animals do not have the ability to break down MOS so it passes intact through the gastrointestinal tract. The cool thing is that once it gets to the lower intestinal tract it serves as a food source for beneficial bacteria. Good bugs like Lactobacillus, Bifidobacterium, and Enterococcus use the MOS as food.  As they grow, they are better able to compete with bad bugs. This is called competitive exclusion. What that means for you is a better appetite and performance over the long term.

Second, bad bugs like E. coli and Salmonella are highly attracted to both mannose and MOS and actively attach to it. Once they are attached to MOS they cannot attach to the animal’s intestine and cause disease.  Pathogenic bacteria are literally passed out of the animal harmlessly attached to MOS. The effect of MOS at controlling things like E. coli and Salmonella is well documented in scientific literature.  Eliminating these nasty pathogens before they can cause disease means your animal can achieve its genetic potential.

This fall one of the trials we did was a challenge study where pigs with ileitis were assigned to three treatment groups. One group of pigs received no treatment, the second group received tylosin in the water and the third group received nothing except TrueGlo as a top dress. We tracked their scours scores on a three-point scale over a period of 14 days. A score of 1 is a normal formed stool and a score of three is a watery stool.  The results of the trial were that TrueGlo was as effective as tylosin at returning stools to normal. TrueGlo also tended to be slightly more effective than the antibiotic treatment when it comes to average daily gain and feed efficiency. There are two graphs of the trial results below.

The first represents the average scour score for pigs by treatment group. Scour scores are a three point scale. A score of 1 means normal formed stool, 2 indicates an unformed or cow pie consistency and 3 is watery.   TrueGlo and Tylosin performed very similarly in severity and duration of scours.  The second chart is feed efficiency and growth rate and both TrueGlo and Tylosin outperformed no treatment with TrueGlo having a  slight numerical advantage over the antibiotic treatment. 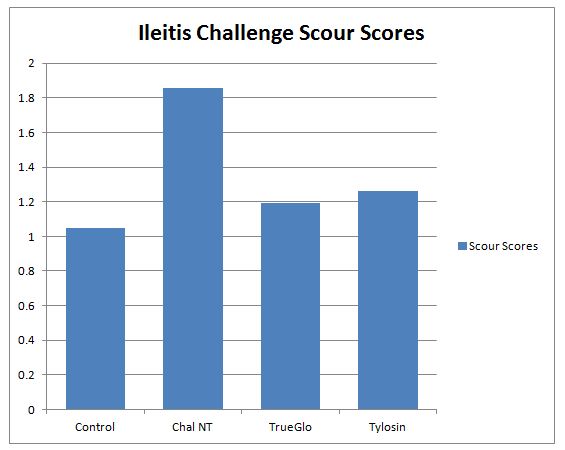 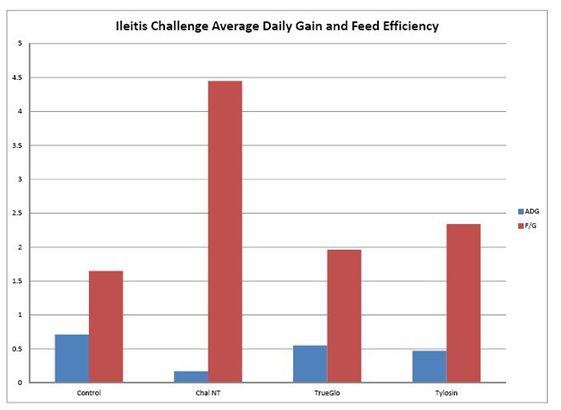 The third major benefit of MOS is an improved immune system. In work conducted at the University of Illinois they demonstrated that animals fed MOS and challenged with the PRRS virus had enhanced immune function and response to the disease without the kind of over reaction of the immune system that kills performance. A meta-analysis of studies on cattle show cattle fed MOS in the receiving period have rates of sickness  over 60% lower than cattle that are not fed MOS. Because of the unique stress and disease challenges that we subject show stock to it is important to feed a product like TrueGlo throughout the feeding period. Doing so helps protect the investment you’ve made in your project animals.

All sources of MOS are not created equal and TrueGlo has multiple sources of MOS that we quantify and test for purity and effectiveness. We do the science so you don’t have to. Our goal is to bring you innovative solutions that get you in the champion drive.

You can find more about TrueGlo here www.goinshowin.com
Posted by Unknown at 1:50 PM 174 comments: